Assessing the Game of Thrones Trend in Nepal – Part 1

The start of the Nepali New Year 2076 was extra special this year, after all, our favorite show, Game of Thrones, was returning for its season finale after making its viewers wait for two years. The hype that the season finale created even before it premiered was amazing and companies were quick to cash in this craze with innovative ideas to market their products.

In Nepal, Winter came for many companies and brands as they tried to participate in this social media game of getting into the hype. We at ACT360 could not help but applaud the creative ideas and share it with you.

Listed below are 14 advertisements by Nepali brands related to Game of Thrones that were noteworthy, and our thoughts on them. Concept: It plays on the nature of the TV series where the loss of life is as common as eating food. A constant reminder for how fragile life is, be it in Westeros, Essos, or Nepal! 😀

What we like: The concept was very well played with what the show stands for. Furthermore, by associating themselves with a show that emphasizes on the collapse of whole families when the head dies, it portrays how managing finances for your loved one even when you are not there is important.
All we can say is: well played Sanima Life 🙂

Fallacies: We believe the graphics on this could be a lot better – in fact, the image has been copied from another site and brands as big as Sanima Life Insurance should ideally avoid indulging in blatant copyright violations. Concept: Khalisisi, one of Nepal’s leading waste management companies, has reflected the concept of waste coming to an end in this post. They have even played with their caption highlighting how often they get mistaken with the name Khaleesi.
What we like: The pile of waste turning to shape itself like the glorious iron throne is brilliant. Kudos to the creative team for that. And the message they put forward, revolving around the topic of the Game of Thrones coming to an end, and waste coming to an end is great.
Fallacies: We can’t think of any.
Engagement /shares in this post: 298 likes, 11 comments and 10 shares in a span of 48 hours. Concept: As an international brand about to open in Nepal, Twisting Scoops capitalized on the famous quote from Game of Thrones – “Winter is coming.” The idea here is to make people aware of their opening in Nepal on 24th April.
What we like: The use of background imagery and the throne is perfect. The fonts used match the actual fonts in Game of Thrones. In a time when everyone was using “Summer is Coming” as their tagline, Twisting Scoops upped their game with their arrival to Nepal.
Fallacies: We think the graphics in this image could have been enhanced to make the ice cream look more appetizing. The downward hanging ice-cream also looks a bit out of place. We also get a whiff of copyright violations for the images used.
Engagement /shares in this post: 43 likes, 4 comments and 15 shares in a span of  5 days.

Concept: This GIF from Foodmandu revolves in the idea that with every order in Foodmandu you will end up with a taste of yumminess and happiness.
What we like: The relation that Foodmandu made with people getting happier with their orders from them looks good. The use of a hashtag like #GOTFoodmandu also reflects they are following the trend too.
Fallacies: The taglines do not exactly link with each other as the first stanza talks about success and failure however the second stanza seems to talk about ordering something and getting happiness out of it. The design is minimalistic and the GIF could probably have been more interesting. We also could not really understand the relevance to GOT here.
Engagement /shares in this post: 5 likes and 1 comment in a span of 24 hours Concept: The main idea is to focus on new interest rates that Laxmi Bank is providing for their fixed deposits. This makes more sense, because historically Laxmi Bank announces changes to its fixed deposit rates as weather updates.
What we like: The advertisements of interest rates with the concept of ‘Winter is Gone’ and ‘Summer has Come’ is brilliant. Hats off to whoever thought of this idea. Furthermore, playing around the words like “DON’T LOSE THE GAME OF RATES” is interesting, and the fonts and color used look amazing.
Fallacies: The effects on the background could have been enhanced more to match the color of the fonts.
Engagement /shares in this post: 339 likes, 15 comments and 145 shares in a span of 4 days. Concept: A reference to the smokiness of the chicken at KFC being prepared by one of the dragons of Game of Thrones. However, the international KFC page did it one step better, making the dragon breathe out fried chicken as a testament to it’s Hot & Crispy Chicken. Now this is one dragon that would be loved, not feared! 😀
What we like: The representation of the product (Smoky Grilled Chicken) is very good and its placement to reflect the idea it is being grilled by dragon’s breath is incredible.
Fallacies: The dragon would have looked more visually appealing if it was more realistic rather than animated, but kudos to the design team for their consideration of copyright issues.
Engagement /shares in this post: 2.5K likes, 54 comments and 17 shares in a span of 18 days. Concept: Yellow Pomelo is hosting a screening of the premiere of Game of Thrones on April 15.
What we like: The invitations for screening wins with the perfect opportunity for people who were unable to watch Game of Thrones due to their schedule. With the tagline of “All men must attend”, they’ve used the famous quote from GoT with modifications, which is great.
Fallacies: The design as a whole is minimalistic although the color, type, and sizes of the font could have been more attractive.
Engagement /shares in this post: 21 likes, 18 comments and 4 shares in a span of 4 days. 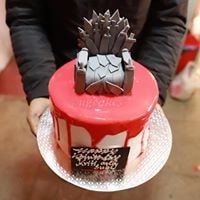 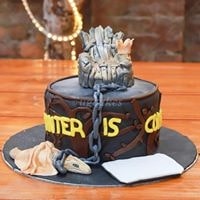 Concept: UG Cakes is a renowned and growing brand among cake lovers through their customized and innovative flavor in the cake industry. The above designs were put forward by UG Cakes to play on the Game of Thrones craze.
What we like: The cake looks so good that it is a dilemma whether it should be eaten or preserved for ages. The details are impeccable in the cake and resemble the iron throne. No matter how well-thought out the marketing campaign is, you simply can’t beat coming up with commemorative products!
Fallacies: Use of effects and appropriate background images could have been done to focus more on the cake. Also, there was no caption in the posts.
Engagement /shares in this post: 3 and 2 likes respectively in the posts. Concept: MIC for youths is a platform for individuals to enhance their interpersonal skills. In this ad, they suggest getting a ticket for career growth training where they use the word “GOT” as a reference to the show.
What we like: It is a typical ad for MIC that includes a summary of their services as well as linking it with some aspects of the show.
Fallacies: The design is very simple and looks like it was done with minimum effort. The font used could have been made uniform and use of a different color could have been done. The word GOT could have been used only once.
Engagement /shares in this post: 14 likes and 4 shares in a span of 19 hours. Concept: Kwality showcases its ice cream sundae with the hint of it being as cold as the breath of the White Walker dragon.
What we like: The concept of using a White Walker dragon’s breath to depict the idea of freezing ice cream.
Fallacies: The graphics could have been made more visually appealing with effects and more realistic images. The color of the font would look good if it contrasted with the background.
Engagement /shares in this post: 8 likes in a span of 2 days. Concept: Karja Bazar has GOT your back, literally, in the game of taking loans, just like the Iron Bank of Braavos.
What we like: The background and the image of the throne complement each other.
Fallacies: The used image is copied from the Internet, which might lead to some repercussions for Karja Bazaar. The tagline “We GOT Your Back” also sounds incorrect – “We’ve GOT Your Back” would be more correct.
Engagement /shares in this post: 28 likes and 6 shares in a span of 48 hours. Concept: In the premiere screening event of Game of Thrones, a replica of the Iron Throne was placed in Octave Kathmandu. Many visitors posed and took pictures as they claimed the throne in the event.
What we like: The experience of sitting on the Iron Throne (even though it’s fake) is gloriou! Kudos to the idea of using the prop and efforts put in its creation. The whole screening event along with the throne looks amazing and visitors also seem really engaged in the pictures published.
Fallacies: The use of colorful fumes around the throne just doesn’t provide the feels for the one looking at the picture. Additionally, more detailing could have been done to the throne and props like swords could probably have been included.
Engagement /shares in this post: 5K likes, 33 comments, and 5 shares. This would also have resulted in a lot of posts from visitors which is great as well. Concept: Portrayal of our unstable Nepali government by Ratnapark Blues. Cartoon image of KP Oli signifies how Oli is responsible for watching over Nepal just like Jon Snow is leading the night’s watch.
What we like: A comedic relief with a deeper message of how inevitable the game of thrones is in Nepali politics. Use of Nepali language makes the message even more relatable for us.
Fallacies: The cartoon could have been more detailed. The addition of a few more characters could also have made this better.
Engagement /shares in this post: 473 likes, 19 comments, and 116 shares as of 16 April 2019. Concept: The tagline has been refined from the famous quote of Game of Thrones, “All men must die”. The ad focuses on the necessity for all men to ride in house Pulsar.
What we like: The use of dark theme looks perfect for the ad and relating the famous quote of “All men must die” to their brand tagline is stunning.
Fallacies: All women can ride too 🙂
Engagements/shares in this post: 1.3K likes, 14 comments and 10 shares in a span of 18 hours.

Hopefully, we’ve mentioned all your favorite Game of Thrones related advertisements from Nepal. Write to us if we have missed some and we will remember to include it in our next list!

Thinking about running your next campaign on digital media? An avid reader, chef, and dancer, Hrikita (not Hritika!) is organized, meticulous and eager to learn any new task she sets herself upon.